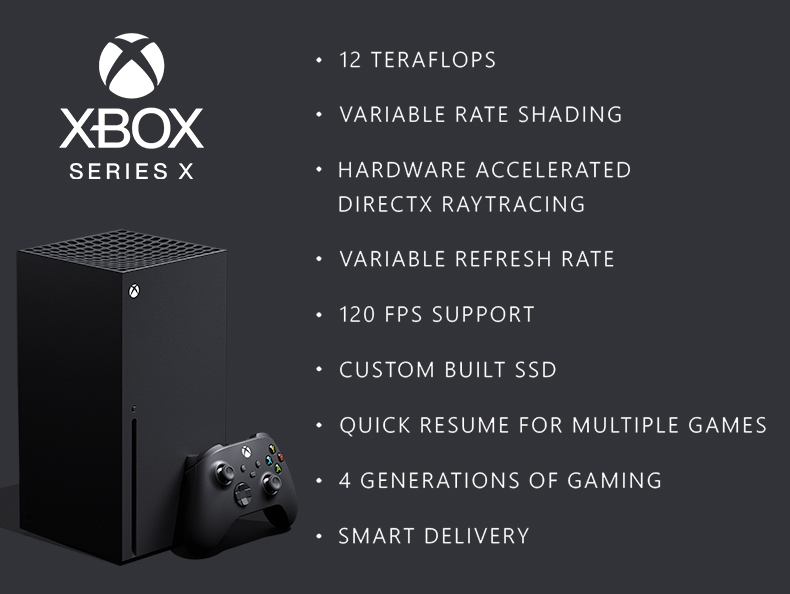 Behold, the fastest and most powerful Xbox console yet!

The latest specs of the Xbox Series X prove extremely impressive. You can expect the next generation to have three primary characteristics: power, speed and compatibility. One of the biggest features is Xbox Velocity Architecture. It will introduce an integration between hardware and software which will feature an architecture for streaming of in-game assets. Developers can instantly access 100GB of game assets. It is a game changer! Essentially, waiting times will be eliminated, fast travel systems will be much faster AND will enable players to discover dynamic worlds unlike anything you’ve seen before.

You can find the full system specs below:

Utilising their new Smart Delivery system, Xbox have confirmed that players will be able to get free updated versions of their favourite games, provided they own it on an Xbox One console. So far, Cyberpunk 2077, Halo: Infinite and a Series X Optimized version of Gears 5 have been confirmed!

It’s confirmed that Xbox One controllers will be cross-compatible with the Xbox Series X. This impressive console also comes with a next-generation controller. The controllers will be designed for a wider range of hands sizes to improve accessibility and comfort. As well as this, the D-pad is designed as a hybrid between the Xbox One version and Elite to provide good leverage with minimal movement. A share button has also been added so you can easily share your gaming moments and connect with other players.

If that wasn’t exciting enough, Microsoft also revealed that the long awaited Senua’s Saga: Hellblade 2 will also be released alongside the Xbox Series X console. This game is sure to show off some of the Xbox Series X’s impressive capabilities, with Hellblade’s unique gameplay and dark action.

Plus, Microsoft also revealed that Halo Infinite will be released alongside the console – so expect it to really show off the consoles power and features! Halo Infinite is considered to be a spiritual reboot of the Halo series. It will be a new story set after Halo 5 that will set the series and its gameplay on an even more ambitious path than before.


We use cookies belonging to GAME & third parties to provide you with the best experience on our site and deliver marketing based on your interests. By clicking I accept you signify your consent to the use of these cookies. By clicking close we'll assume you are happy to receive cookies from the game.co.uk website. To learn more, please see our COOKIE POLICY.